The 44th Regiment of Foot

The regiment was raised in 1741 and firstly bore the name of its founder Colonel James Long and was originally the 55th regiment of foot. After first employments during the Jacobite Risings of 1745 and the Flandeers campaign in 1748 the regiment was renumbered as 44th Regiment of Foot, actually as part of a large reorganisation of the British army. A few years later the regiment was brought into action during the French and Indian War where it fought in important battles like the Battle of Carillon, the Braddock Expedition and the famous siege of Fort William Henry. Above all it served in the Battle at La Belle-Famille which the "Bloggers for Charity" want to restage this year at several events to collegt attention and rise funds for the charity projects "Help for Heroes" and "Men Matters".

For this excellent venture I agreed to paint a unit of redcoats which will represent this heroic regiment. It consists of twelve figures manufactured by AW Miniatures who is establishing a quickly growing 28mm range covering the FIW. Overall the miniatures are very nice. The casting quality is good at most parts although some thin details like the loading stick are damaged on several miniatures. The sculptings are crisp and clear and make it rather easy to distinguish the different parts and layers of the miniatures. Unfortunately a lot of the finer details (especially the lacing) are left out and must be painted on. The faces are quite good but don't have the excellence and expression the top-notch manufactorers (Perry, Wargames Foundry, Front Rank et al.) usually provide. 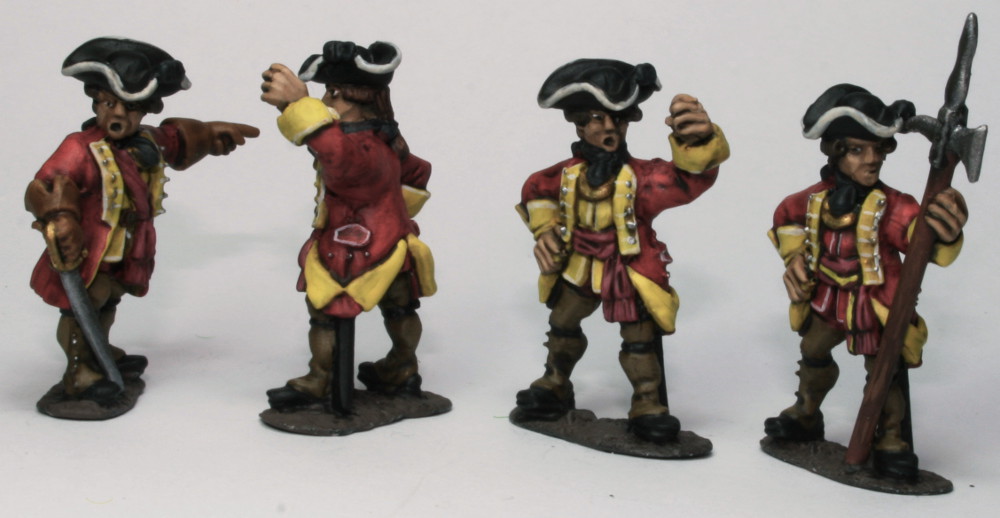 As usual I used Vallejo Model Colours and Armypainter Quickshade to paint the figures. My main source for the uniforms was C. E. Franklin's "British Army Uniforms from 1751 to 1783". There I read that officers used to wear waistcoats in their regiment's facing colours. Therefore I decided to give them that individual blot of paint. This time I didn't base the figures because James and Andrew preferred to do that themselves.