Back from Würzburg and to business

My apologies for being absent lately but we - meaning my three girls and me - spent a a couple of days with friends near Würzburg. It was a wonderful long weekend with wonderful hospitality, excellent weather and two interesting trips. One lead us to Marienberg Fortress and the other to the Bavarian Army Museum again. This time to visit an interesting exhibition about Napoleon and Bavaria. I'll post more about those trips soon but for now a small preview:
But most of all let me thank you for the wonderful, helpful and kind feedback on those Desert Rats. As most of you suggested I'll mix a couple of colours for the shirts to break the uniformity subtly.

But during this week there's work to do for our Plancenoit project. Three ruins need some progress and half a dozen of French voltigeurs as well. And lately there have some troopers stormed my workbench which I have to finish... Stay tuned!
Eingestellt von Stefan (aka. Monty) 6 comments:

Recently a friendof mine was pondering about some plans for Egyptian / Middle Eastern terrain. How useful it is for most periods betwenn the Crusades and Modern Warfare and what interesting games we could play with Bolt Action, the upcoming Black Ops ruleset, SAGA or even Song of Drums and Shakos for Napoleonic skirmishes.

So guess what... That gave me the final push towards the plastic Desert Rats by Alan and Michael Perry. The box comes with 38 figures which should more or less be enough for a Bolt Action platoon. Of course the twins made a couple of very nice metal sets in addition but for the beginning I wanted to keep things small. (frequent readers might guess that this intent has probably a rather short lifespan...)

Anyway the figures have the usual high quality of Perry miniatures. The anatomic composition is wonderful and the poses look vivid and natural. Some of the faces could have been worked out deeper but that's my usual problem with Perry plastics. They leave a lot of artistic freedom to the painter which makes it very difficult for a me to outline the facial features. All other details are worked out very well and present themselves crisp and clean.
As usual the casting quality is very good. As far as I know the Desert Rats are cast by Renedra who proves again to be a top notch company for plastic molding. Assembling the boys is rather easy. The leaflet gives vital information for the right combination of arms they seem to fit on more or less every body. The only tricky part are the helmets which have to be cut from the sprue very carefully to leave the brim undamaged.

For the start I assembled three laboratory rats to test different colour combinations. Once more I consulted skilled and helpful Mark Hargreaves whose blog 'Over open Sights' should be well known by most of you. On this very blog I saw a couple of Desert Rats in his usual splendid style and wanted to lean my humble work against his splendid pieces of art. As usual this kind fellow gave me some precious advice and I adhere to most of them:

So I used Vallejo 'Desert Yellow' as base colour for the trousers, 'German Camouflage Beige' for the webbing and 'Iraqui Sand' for the helmets. With the shirts I experimented a bit. After I read that the uniform pieces bleached out rather unevenly and that some British troops temporarily used petrol to clean their stuff I thought this could be a good chance to break the uniformity of the Desert Rats. Thus I painted the three shirts in three different shades of greyish beige colours: 'Iraqui Sand', 'Stone Grey' and 'Beige'.

Currently I'm not sure which colour to employ most. Unfortunately until now I didn't get a chance to examine some original pieces of WW2 desert uniform. My last visit of the Imperial War Museum is ages back and I don't remember the correct shape of the pieces there. But judging from my personal taste I tend to 'Iraqui Sand'. It gives a subtle shift of colours without breaking the greyish sand colour scheme.
What do you think? Which colour is most appropriate?

In case that you want to have a look at other interpretations of those Desert Rats and visit either Mark's blog (linked above) or go to Raffa 'Archiduque's gallery. He's presenting some really great figures there.
Eingestellt von Stefan (aka. Monty) 29 comments:

Our game for Crisis: The battle of Plancenoit

Last week we had an extraordinary club meeting and had the blocking rehearsal for our rather large presentation game for Crisis 2015 in Antwerp. It covers the final episode of the battle of Waterloo taking place in the village of Plancenoit. Our fellows Bernhard and Holger conceived an L-shaped table of around 3m x 5,5m which came into being with the help of the whole team. The humble author is contributing three houses and a couple French figures as you may have recognised as attentive readers of this blog.

So here are a couple of pictures from the great day. Some of them are rather blurry since I had to use my cellphone and lighting is rather subjar in the club HQ. The few better pictures are by our friend Holger. Please klick onto the pictures to enlarge them:
Read more »
Eingestellt von Stefan (aka. Monty) 31 comments:

During the last months I was lurking around Fantasy Flight Games's (FFG) Star Wars miniature game 'Imperial Assault'. It's more or less a tabletop board game hybrid covering small rebel operations against the Galactic Empire. Thus there are up to four players controlling heroes of the Rebel Alliance and one player leading the missions as a kind of game master and playing the Empire as well. Actually the game is designed to play campaigns of ten to fifteen missions but it has a two player skirmish variant as well.

Anyway after months of pondering I decided to invest in the game and actually wanted to order the German version which was released in late August. By mistake I ordered the English version instead but decided to hold it and rely on my humble knowledge of English. With around 80 € the game isn't cheap at all but you receive a thick and heavy box for your money: 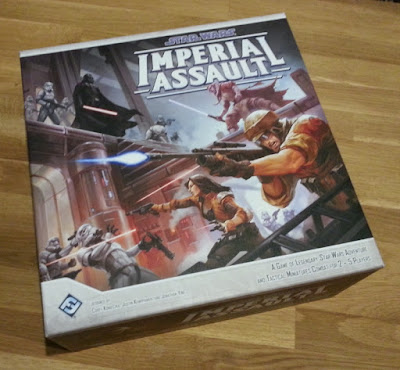 As usual for FFG the cover art is top notch. Some rebels fighting stormtroopers and Darth Vader in person overwatching the battlescene. Excellent stuff so far. After opening the box I discovered the full content. It's really filled to the brim: 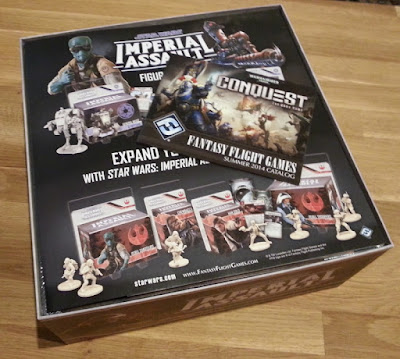 Of course there's some advertising material included but most impressive is the pure extent of the game material:
Read more »
Eingestellt von Stefan (aka. Monty) 15 comments:

As you know I'm working on a decent collection of British WW2 Red Devils. Recently I discovered that Warlord Games is giving away a free miniature with their Bolt Action rulebook that would perfectly support those boys:

Unfortunately I bought my Bolt Action rulebook ages ago at our local hobby store and didn't get one of those chaps. Warlord only gives them away to people buying directly from Warlord Games. Thus my chances to get one of those are limited to the secondary market.

Does anybody have one of them left and is willing to leave it to me for trade or a reasonable price?
Eingestellt von Stefan (aka. Monty) 8 comments:

It must have been twenty year ago when I first watched 'A Bridge too far'. Since then this movie influenced me and my wargaming hobby. Years ago I had 20mm Red Devils. Firstly Revell plastics and later Britannia metal miniatures. A while ago I stumpled over Warlord Games's range for their Bolt Action game and fell for their republished BAM figures. After a longish break I painted the second batch last week: 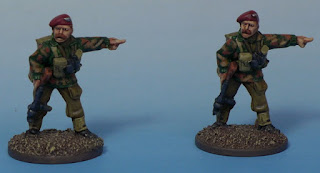 First two leader figures. Actually they're meant to be officers but I decided to use them as sergeants for my paratrooper sections. 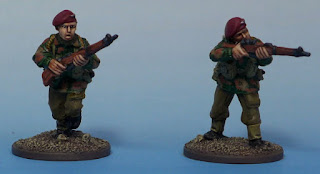 Then a couple of riflemen wearing berets and a small 2" mortar. I have no idea whether I'll really need him but probably I won't harm to have one. 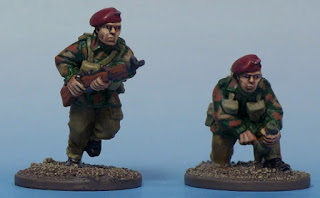 Last but not least four more careful troopers wearing the Mk. 2 Airborne steel helmet with some camouflage on it. 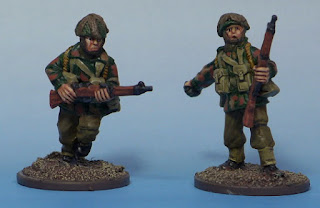 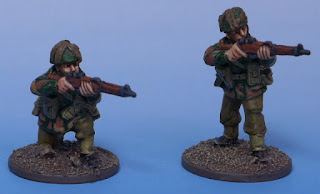 As you see I have to finish the bases but I wanted to take some pictures before varnishing the boys. For the DPM smock I used the same colour combination as for my earlier Red Devils. Although it looks too greenish on the detail shots the general impression on the table is rather satisfying to me. Especially because they combine well with their earlier painted chaps.

Only ten men but a large step to my initial 500 points army for Bolt Action. Only twelve men to go!

For now please don't forget to have a look at the Google+ community dedicated to 'Paint Table Saturday'. 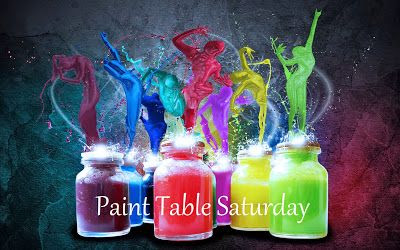 Now for something completely different. That sounds a bit dangerous always but this very time it's just something hobby related that isn't my actual cup of tea. A club fellow of mine is member of the organising team of the upcoming WRG 6th Edition Team Championchip. He asked me to publish the invitation for his event and thus I give the floor to Kalle. Here we go:

you are all welcomed to the


So far, so good. I hope for some of your might Kalle's invitation be interesting. Anyway please forward the news to your fellow gamers. Hopefully you'll have a good time in Braubach.
Eingestellt von Stefan (aka. Monty) 3 comments: