Since our bloggosphere fellow Miles presented some lasercut kits from Laserdreamworks during the last painting challenge, I've been strolling around the 28mm ships Matthew Green and his team are offering. Lately my friend Bernhard and me were pondering about our Tactica 2017 game and I got roped into preparing some more boats too easily. Our game will address the British landing at Aboukir in 1801 and of course we'd like to have more than the two rowing boats we brought to Hamburg last year. However that brought me back to Laserdreamworks and made their kits even more seducing. Well... 'Landing at Aboukir' implies that we'll not likely present whole Neptun's ocean but a piece of the shallow Aboukir bay and a piece of its sandy coastline of course. So the larger ships dropped out and I went for one of those rather small gunboats.

The kit is based on an improved design by Commisioner Hamilton from 1806 or 1808 but it's well reported that the British employed larger ships than rowing boats at Aboukir before. Unfortunately I'm not au fait enough with naval history to explain the different types of tenders Royal Navy ships carried along during the Age of Sail but as far as I know from different pictures a launch of this gunboats size seems plausible. 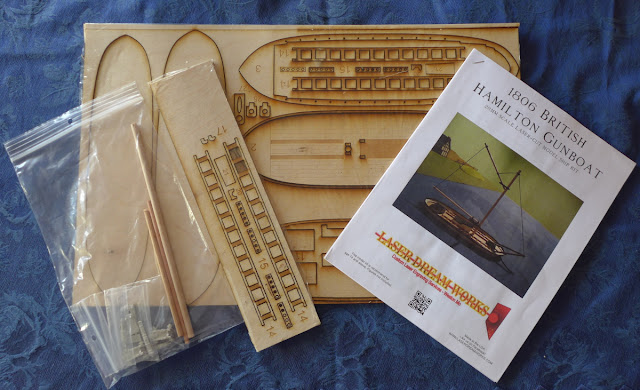 About five and a half months until Tactica 2017 in Hamburg. This time our club is preparing a Napoleonic game featuring the British landing operation at Aboukir in 1801. Although my friend Bernhard has overall control over the project I'm glad to take part in it and to contribute some humble pieces. After all there'll be one or two rowing boats, a larger gunboat and about 50 foot figures from yours truly meaning that I really have to start preparing and painting the stuff.

With the gunboat I'm on a good way as you'll see in a later post but with the infantry units I'm more or less in the starting blocks. As revealed earlier this week there'll be a highly converted unit of British Redcoats from my workbench. For that I'm using different plastics sets by Perry Miniatures to create rather early Napoleonic uniform variations. Namely some chaps with trumplines, overalls and stovepipe shakos. Since I didn't want to use all the trumplines from the AWI sets I needed to find a way to reproduce some of pieces. Unfortunately my sculpting skills are very limited so I turned my efforts to Instant Mold: 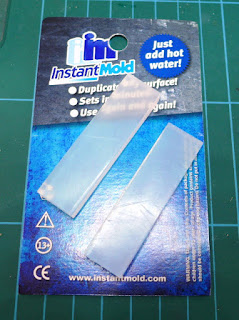 Instant Mold is a clear material which looks slightly like hot glue. At room temperature it's rather solid with only little flexibility. But exposed to higher temperatures it becomes very soft and flexibel. This way it is useful to create simple moulds to reproduce roughly two dimensional pieces like shields, structured surfaces and such. Anyway I wanted to have trumplines so I tried some more complex one piece moulds...