All good thing come to an end and so does the 5th Analogue Hobbies Painting Challenge. At the beginning of the last week of the challenge and I was pretty close to my target of 750 points. The surprising victory in the antihero bonus round - thanks a lot again - gave me as well as my points account a real push. Thus I thought I should put all my efforts into scraping up some points and painted at least five Old Guard Grenadiers: 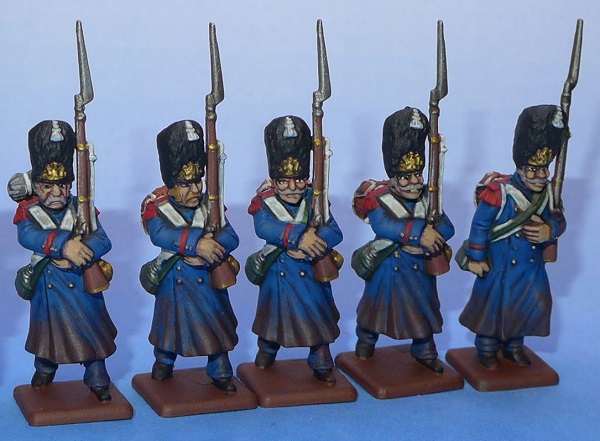 Those chaps are part of a larger unit which I started to paint last year. Actually I wanted to paint all the remaining figures during this painting challenge but real life was pretty exhausting lately and spiked my guns. Anyway for this reason the boys haven't been based yet until their command will be finished. Hopefully they'll see action during our recreation of Plancenoit 1815 later this year.

The figures are from Victrix's plastic box and have an excellent sculpting quality.Unfortunately the bayonets are very thin and delicate. Meanwhile I would prefer metal figures therefore.

As usual I painted them with Vallejo Model Colors and will base them as a foursome on 40mm x 40mm bases. Finally the unit will either consist of 24 figures as a standard unit for Black Powder.
Finally I took my last entry to fulfil our host's justified claim for an entry fee:

Blackbeard the Scourge of the Seven Seas 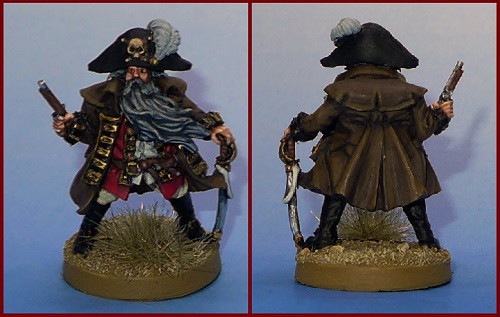 I know he is no official or historically correct figure of Edward Thatch but when I first saw him at Crisis 2014 I knew that he'd represent this well-known pirate. With the long beard and the variety of pistols in his belt he should be a credible embodiment of this heinous rogue.

The figure is a resin miniature by Black Scorpion and it's slightly larger than 28mm and of course rather brawny as you see. The details are cast extremely clear and it was a joy to paint this fellow. As last year I added a small reminder of the occasion Curt received this miniature for: 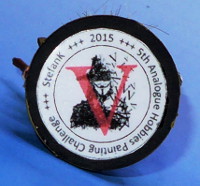 Under Blackbeard's base I applied a small badge displaying this year's motto and logo.

But besides presenting these figures let me thank all the participating fellows and especially hardworking Curt. It was once again a pleasure as much as an honour to me to join their exquisite company and queue my humble work between the unique pieces of art you submitted. Miles calculated the amount of painted miniatures and the econmic outcome of it. He worked out about $500.000 that we generated during the last three months (details here)! Kudos!

Gladly I'm able to announce that I mastered the side challenge I had with our gifted fellow the Honourable Mr Michael Awdry Esq. We both were lucky and persistent enough to submit an entry for each and every bonus round. My contender was even able to win two of the bonus rounds against all other submitters. Well done, Sir Michael, you well deserved winner. Kudos!

So actually that's it from me. I'll assemble a complete review of my part of the painting challenge during the next days with the latest version of my spreadsheet.
Eingestellt von Stefan (aka. Monty) 7 comments:

War of the Roses infantry and hay cart

Curt's painting challenge is near its end but finally I managed to create my first entry besides the bonus rounds. I'm very satisfied to have submitted all of them but besides other painting came off badly.

Anyway finally here are some miniatures I painted more or less simultaneously to Richard III. for the antihero bonus round. Partly as test figures for the armour: 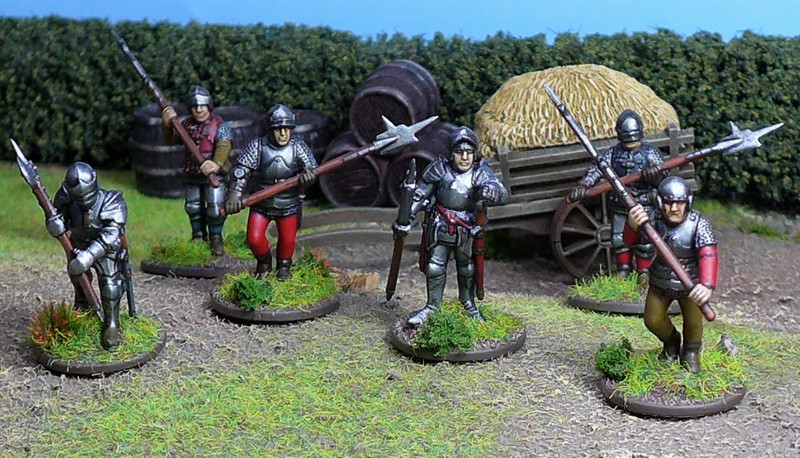 These are six figures from the bills and bows box Perry miniatures made for the Wars of the Roses. Actually they shall serve as mercenaries during the Burgundian Wars especially during Charles the Bold's siege of Neuss in 1474. I painted them to get used to the new historic period and the experiment with colours for medieval clothing and armour. Altogether excellent plastic miniatures which are a pleasure to assemble and to paint.

In addition I assembled and painted a small piece of scenery: Warbases' hay cart. 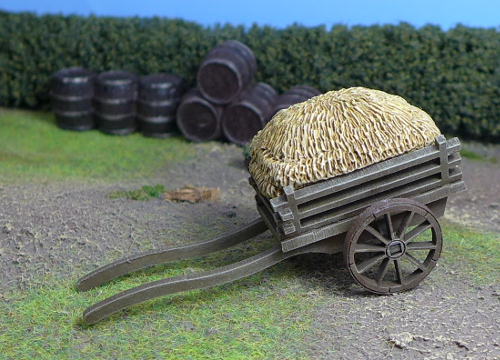 It's a eight or nine piece MDF kit which comes perfectly cut. It doesn't need much cleaning and is easily glued with super glue or PVA glue. A very nice piece by Martin and Diane which I painted without priming it. Since the MDF soakes up the paint this worked rather well. The hay load is a nicely cast resin piece which fits onto the cargo area very well. I didn't glue it to have the chance to use the cart with or without hay.
Eingestellt von Stefan (aka. Monty) 10 comments:

A horse! A horse! My kingdom for a horse! - Last Bonus Round "Antihero"

Finally the last bonus round in Curt's 2015 painting challenge came and I decided to submit a miniature I'd been keen to paint for a long time but didn't find the right occasion. So this the staged entered...
King Richard III. 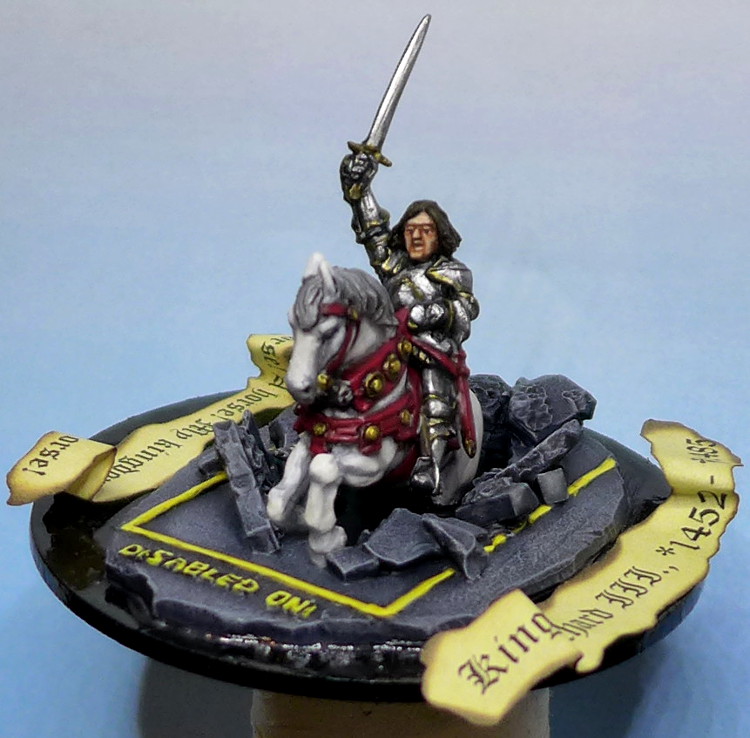 RichardPlantagenet the Duke of Gloucester was the younger brother of King Edward IV. When Edward died in 1483 his marriage with Queen Elizabeth (Woodville) was declared invalid and his sons turned illegitimate as heirs. So Richard took the throne and reigned until his death during the battle of Bosworth in 1485.


This is only the very climax of the awesomely interesting life of the last Plantagenet king of England. He witnessed the Wars of the Roses, fought against the Lancastrians and saw the victory of the house of York. But in the very end Richard III. stayed in people’s mind as an usurper of the throne, a murderer and a sinister intriguer. Although some of those aspects might appear probable our picture of Richard III. is highly influenced by the play by WilliamShakespeare in which he describes the later years of this interesting monarch. Soaked by Tudor propaganda he shows Richard as a power-obsessed, ruthless villain who meets his fair end by the sword of Henry Tudor who will be King Henry VII. Rather soon. Anyway for me it’s one of Shakespeare’s best plays and I love the character he gives Richard. To my a perfect antihero which made him my favourite choice for this bonus round. 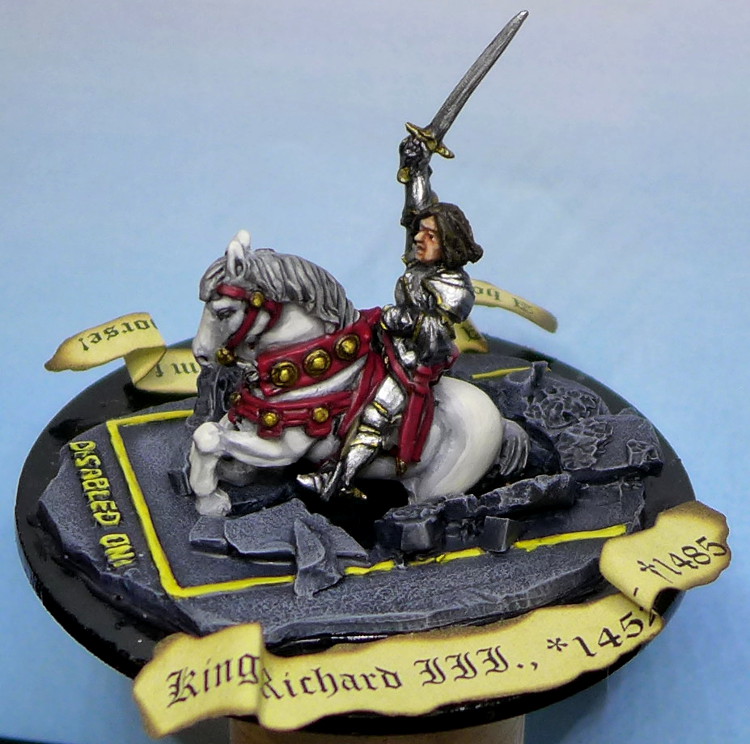 The figure:
It’s made by Michael Perry as a special miniature on occasion of the discovery of Richard’s remains in Leicester in 2013. Since they were found under a car park the twin converted the figure in a way that he rides right out of the street. A very nice three piece vignette which I had been waiting to paint for a long time.

The colours:
As usual I employed Vallejo Model Colors to paint Richard. Only exception is the skin. For the first time I tried the Foundry Expert Flesh paint set. I'm very satisfied with the result and will probably keep using it. Many thanks to Mark Hargreaves for his hint! 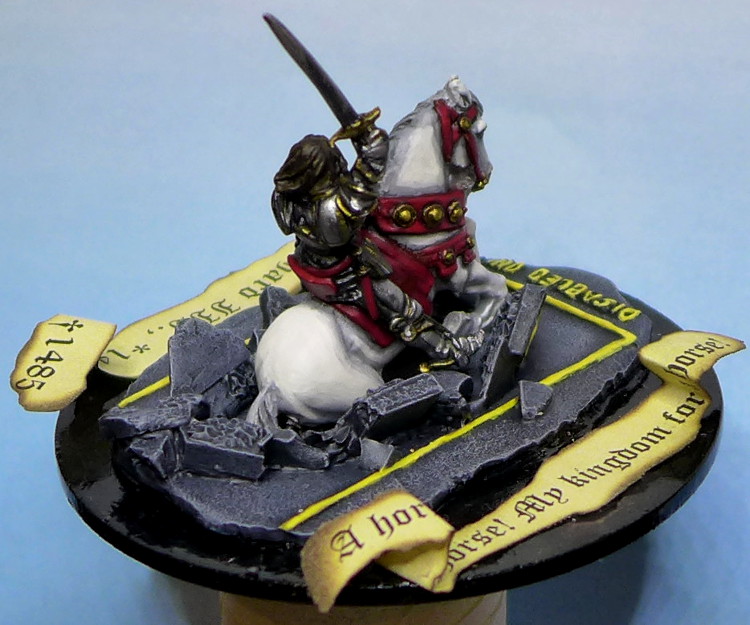 The base:
The vignette is mounted on a 60mm circular base from ever excellent Warbases. Because I wanted to underline the figure itself and its border I painted the base black and coated it with high closs varnish. Additionally I made two banderoles that I attached on the left and on the right. One of them describes Richard’s dates of birth and death while the other one quotes Shakespeare’s well-known play: “A horse! A horse! My kingdom for a horse!” (Act 5, Scene 4).

Please let me remind of the voting for this bonus round. Please turn to Curt's page and place your vote. There are a couple of extraordinary pieces which deserve attention and - of course - I would appreciate any vote for my humble work.
Eingestellt von Stefan (aka. Monty) 14 comments: