From the very beginning of my NWF efforts a painting by Orlando Norie kept fascinating me: 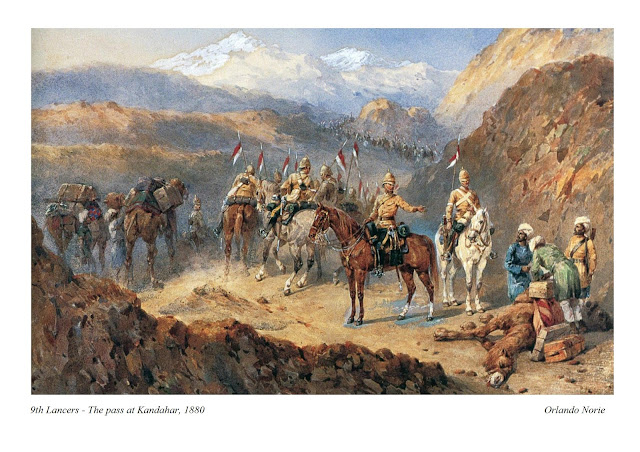 Thus acutally since 2015 I've been pondering about painting a unit of lancers to represent those brave men. To be honest those figures have been lying on my lead pile for a while but during the last weeks I finally took the time to finish the horeses (they've been primed ages ago...) and to paint the riders. All in all I aimed for a twelve men unit to have them ready for any rule set from 'The Men who would be Kings' to 'Blackpowder': 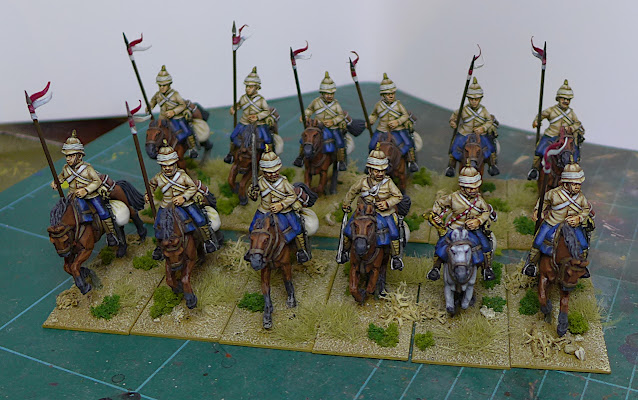 The miniatures themselves are from Perry Miniatures' sublime Sudan range. Actually they represent the 10th Hussars fighting against the Mahdi rebellion with improvised lances to catch prone enemies. After I compared them to Norie's painting I came to the conclusion that they should serve rather well. There are a couple of small inaccuracies: The blanket on the back of the saddle is missing, the 9th lancers on the painting appear to carry an Indian style water bottle, it's not clear whether there are pugrees on the painting. Anyway I was ready to accept those minor flaws. Especially since I didn't find any better models. 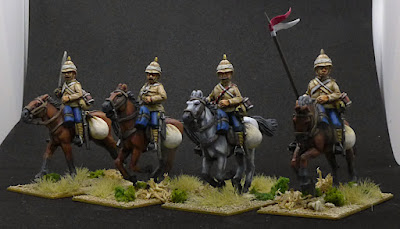 There are several photographs of 9th lancers during their tour of duty in 1880. On these the fellows show a variety of clothing: home service pieces, padded winter jackets, khaki jackets etc. After some pondering I decided to paint the unit uniformly in khaki jackets and blue home service trousers. 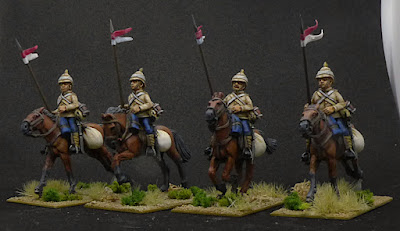 For painting the figures I employed my trousted Vallejo paints. The khaki sheme is bases on VGC 'Khaki' while most other paints where from the Vallejo Model Color range. For the first time I didn't employ Wargames Foundry's skin colour sextette but Citadel's contrast paint 'Darkoath Flesh'. I'm really pleased with the result. Especially because it safes loads of time. It's just one layer. No more no less. With the Foundry colours I painted fours to six layers to build up shades, highlights etc. 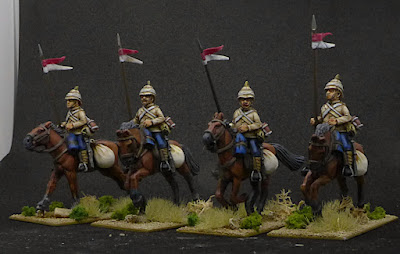 For the lances I decided to use steel pikes rather than the delivered lead ones. My experience showed that the latter tend to bent and never get straight again. Although those don't represent the bamboo lances used at that time perfectly I appreciate their durability. The pennants are self-made. I cut them from common printer paper and apprlied super glue to give them a plastic like stiffness. Finally painted them red over white.
To pretect the models I applied a couple of layers of gloss and flat varnish by airbrush.
That's it for now. Soon there is more NWF stuff to follow but not now. I hope you like them. Please feel free to leave a comment to let me know.
Eingestellt von Stefan (aka. Monty)