Another humble contribution for our February show game in Hamburg was one of the rowing boats Perry Miniatures released last autumn. It a pretty piece sculpted by Alan Perry to represent a Napoleonic British rowing boat used for several landing operations during the campaigns in Flanders, Egypt, Denmark and Spain as well as in the whole Carribean area: 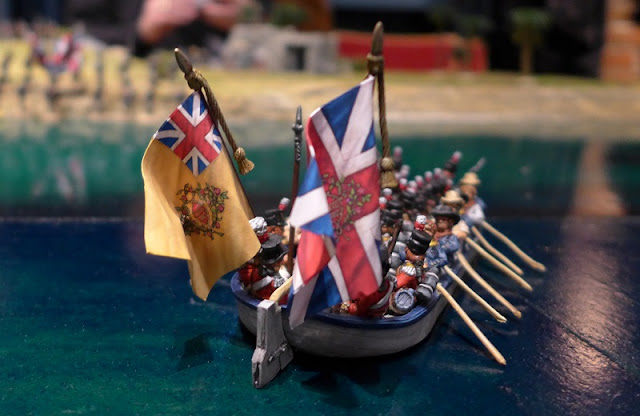 The boat itself is a two part resin kit with six rowing seamen attached already. In addition there's a supplemantary set of six further seaman and a coxswain giving it a crew of 13 Royal Navy seamen. 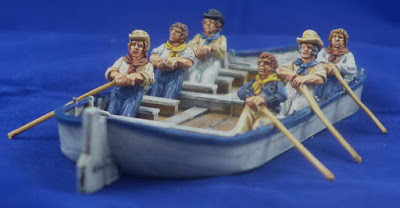 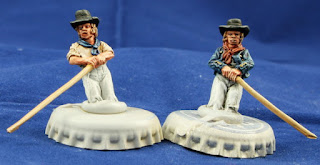 However the boats were meant to transport troops so troops were needed to man the 28mm equivalent as well. For this purpose Alan created two sets of sitting redcoats which fits perfectly on the boat's benches. One of the set comes with 18 soldiers joint to thress or fours while the other contains eight solitary figures to supply bow and stern with brave Brits. Altogether the boat has a complete 26 figure infantry unit in addition to the 13 men Navy crew! 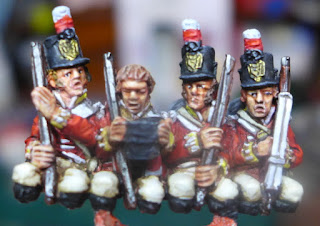 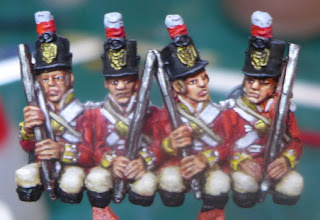 Painting the boat was a rather unusual experience. The Navy figures were pretty much business as usual. Although seated the rowers were complete figure that I painted more or less like any other 28mm miniature. But the strung readcoats were a challenge. On the one hand the missing feet made the surface to paint smaller which should cause time saving. But on the other hands the details were much more difficult to reach causing loos of time. After all I presume painting these chaps caught sligtly less time then painting 18 standing figures. 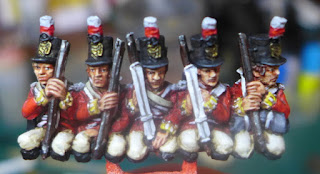 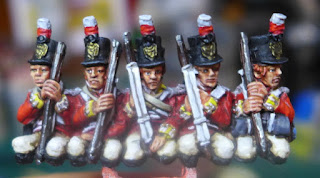 The solitary figures of course went in the normal manner. Especially the officers are wonderful sculpts wearing the top hat which feeld iconic for the early campaign especially the campaign in Egypt. For that reason I decided to use the 'old' pre-1801 colours. It is doubtful whether the units at Aboukir carried these or whether they had received new colours with the Irish Saint Andrew's cross early enough. Since I wanted to use the wonderful colours by GMB again I opted for the oldish version since the newer (Peninsular) version is already bearing the battle honour for Egypt. 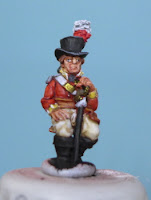 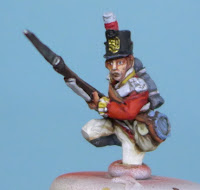 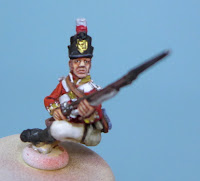 On our table we had three of these boats in addition to two further rowing boats by Britannia and a British gunboat I built from Laserdreamworks nice lasercut kit. 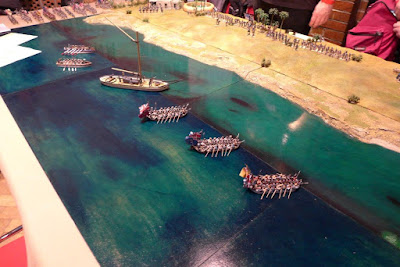 Unfortunately the boat itself isn't appropriate as an entry since I started working on it before the challenge started. During late summer last year I assembled and painted the hull but didn't manage to complete my work.

During challenge time I reworked the cabin, created the mast and painted three artillery pieces for it. At least the guns might find consideration here. 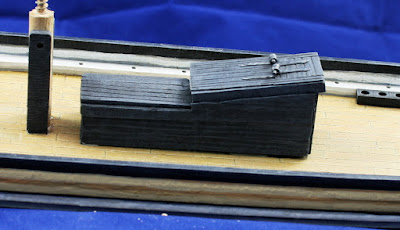 Well... That's it for now. Of course my share of the Curtgeld project which Michael A., Sander and I executed mutually is pending but this will be brought to your attention by our most appreciated fellow Michael. Yours truly is working on a couple (ten...) T-72 tanks in 15mm but they'll not be finished until our challenge time runs out.
Eingestellt von Stefan (aka. Monty) 12 comments:

A couple of weeks ago I presented the intermediate state of the figures I wanted to paint for our game at Tactica wargames show in Hamburg (here). Namely it was the 28th Regiment of Foot which I wanted to recreate to serve during Sir Ralph Abercromby's landing at Aboukir in 1801. Finally the very day before we went to Hamburg I finished my work:

The unit consists of 24 figures of which 21 were converted plastics from Perry Miniatures and 3 metal miniatures for the three officers in the unit. First I though of using plastics for them as well but I wanted those iconic top hats most officers wore during the 1801 campaign.

For details about the conversion please look here. However as you see on the picture I used greenstuff to make most trumplines, water bottles and pouches. In addition I combined parts from the British Napoleonics, AWI British, AWI Continentals and NWF British plastics to create a rather relaxed looking unit. The idea was to have a unit which has a small break after a long march or something like that.

Of course the unit needed a combination of centre and flank companies. As usual I decided to include three men for each of the flank companies and 15 centre companie fellow. 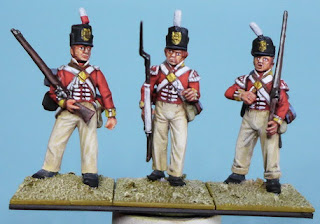 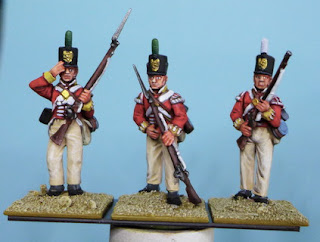 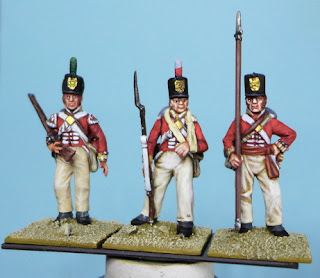 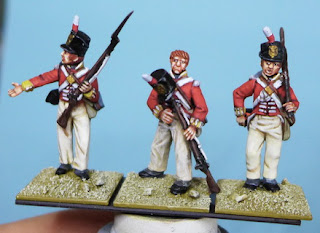 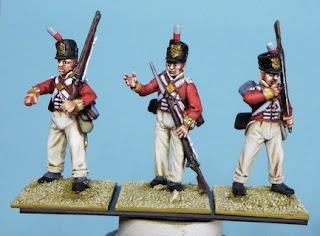 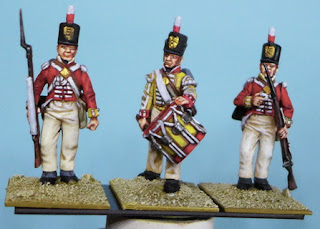 Well... That's it so far. By now the most individual unit I painted and it was as much fun as it was work to create 21 individual figures. Finally they saw service here at Hamburg. During the three games we played they performed rather well and contributed their part in driving the French off the beach.

However I hope you like my humble contribution to the challenge. Of course not a tremendous mass of figures but at least the project that kept me busy from November to February. In addition to this usual version of the 28th I created a rowing boat which carries them to the beach. But this will be content of my next post...
Eingestellt von Stefan (aka. Monty) 5 comments:

Last week I introduced the we brought to Tactica but this week I want to focus on a couple of the excellent tables other people presented. As the years before there were some awesome pieces of craftsmanship and as the years before I wasn't able to take good pictures of each and every of them. Thus I do honestly recommend you search the internet for other Tactica reports to get a complete impression of the whole show.

On the first floor there was a theme room presenting 40 years of wargaming history in Germany. Several contributors brought an interesting collection of wargaming stuff and models from the early 1960s until today:

Besides meeting old friends and making new ones Tactica is always a great chance for playing. It's two days offer plenty of time to try a couple of game but nevertheless during the last years I never found the time to take this chance. This year I was lucky enough to have some free time on Sunday morning and joined a Sudan game the Kurpfalz Feldherren presented. They used the rules of 'This very Ground' and create an interesting and thrilling scenario:

As you see it was a tremendous weekend again. I had a really great time with my friends and enjoyed the show even more then the years before. It was priceless to see old friends again and make new once. Especially meeting Michael aka. Dalauppror was a great pleasure. Although there are eleven months to come I'm already looking forward to Tactica 2018 !
Eingestellt von Stefan (aka. Monty) 27 comments: