In hindsight my last entry was pretty lame. The pictures were taken on my mobile phone and the entry itself was arranged on that tiny device as well. Seen on a usual screen the pictures and overall appearance of the post was far from optimal. Hence I understand why the commentaries were as scattered as restrained. Anyway I got cracking a bit to present you something better quickly:

Last weekend was packed with family business. It was Anna's second birthday and our whole family fell in on Sunday so Saturday was overshadowed by the preparations. After all it was a merry day with cake, tea and football. Luckily team Germany performed better than my appreciated Three Lions and threw out Hungary 3-0.
Anyway on the workbench there are still a couple of Zombicide and Black Plague miniatures. Especially those character figures from Black Plague are excellent stuff to work with. The plastic is the same softish stuff well known from board game pieces but nevertheless the miniatures are well detailed and well cast. 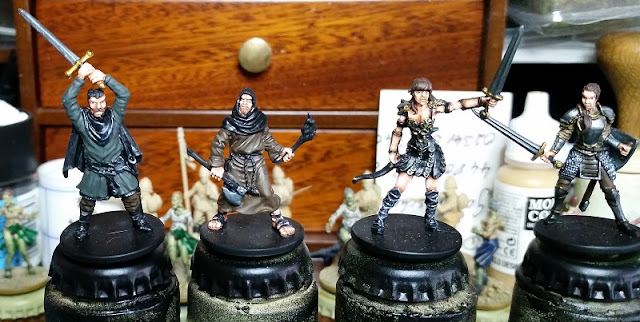 The figures I'm currently painting are from the Kickstarter exclusive survivors. You might notice that they recall some central characters from established TV series and films. I'll explain that further when I present the finished pieces. May the first of them rather soon... 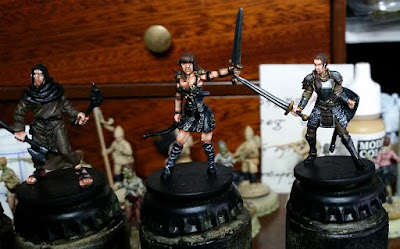 Besides those four chaps there are still some season 1 walkers waiting for the final touches and of course the NWF infantry in need of colours. So actually my workbench is once again fully stretched.
Eingestellt von Stefan (aka. Monty) 3 comments:

How time flies!
Currently unpleasantly long days at work as well as the UEFA football championship are taking too much time from my troubled account for hobby time. Thus my presentable progress is not too much but at least my Zombicide painting project goes on:

As you know hunting 32mm zombies took a certain ammount of my leisure time lately. So it should not surprise my appreciated readers that the current Kickstarter campaign from the authors of Zombicide caught my attention. Cmon (Cool Mini or not) and Guillotine Games refined the well known Zombicide engine to a co-operative dungeon crawl for one to six players called 'Massive Darkness':

My apologies for being absent lately but besides some more zombies I tackled a trio of figures that took a bunch of time. Finally I managed to finish the last three daring scotsmen for my NWF highlanders:
Once again it took a while but you know how lousily slow I'm painting from time to time.


So now we have the second unit for NWF finished after those more or less generic Brits I painted more than a year ago (here). In addition there'll follow those wonderful new Perry plastics, some mounted troops, artillery and whatever seduces me to complete the collection: