It's always difficult to start a post with 'now for something completely different'. For that reason I'll avoid this phrase although I'm about to tackle a topic that is not stricly wargaming related. Whereas... Who would argue that beer is something wargaming related? Isn't it all about a great time with friends, beer and brezels? Maybe not all but at least a major part of it so let me share how Monty's Manour turned into a brewery a couple of weeks ago...

Well... It was during those days after Pentecost when precious Mrs Monty took our girl to a North Sea trip and left yours truly behind. The three girls were about to spend a couple of days with my parents in law and I found it unnecessary to spoil their and my holidays likewise. Anyway that left poor old Monty behind and loneliness planted the idea into my mind to invite one of my oldest friends to try some do-it-yourself brewing.

A word, a blow. On Pentecost sunday Auld Nick joined me and first we inspected the ingredients for our brewing day. We decided to make an India Pale Ale (IPA). A kind of beer we both appreciate and which is available in prepared packages with weighted out ingredients:

Guess what... Even more zombies

Although I scored some progress on my last three highlanders I didn't find the time for too many intensive painting sessions. Thus I turned my attention to a much easier bunch of figures: 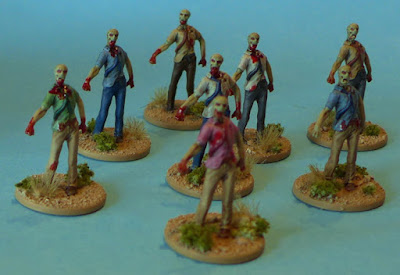 Since I don't want to bother you with repeating the facts about the Zombicide game so let me just mention the two posts about it to our newer reader:

With those eight chaps done I've finished after all three fifth of the walkers. Currently there are eight of the sixteen females on my painting table. Maybe something for next week...

Anyway although I enjoy it very much to do some quickly painted miniatures without caring for details too much I'm looking forward to having all zombies done. After them I'll address myself to the survivors. Some much more challenging miniatures again.

After a lot of zombies here is a post about a historical theatre of war again. Finally my unit of 72nd Highlanders fills the ranks having nine brave Scotsmen ready for action now. This meaning that yours truly managed to finish six new figures by now:

The last two weeks were pretty quiet here. My apologies for that but the Pentecost weekend and its preparation took too much time. Wonderful time indeed because it was family time but on the other hand your's truly didn't find the time to presents his last outcome.

So here we go: Another eight Zombies for Zombicide: 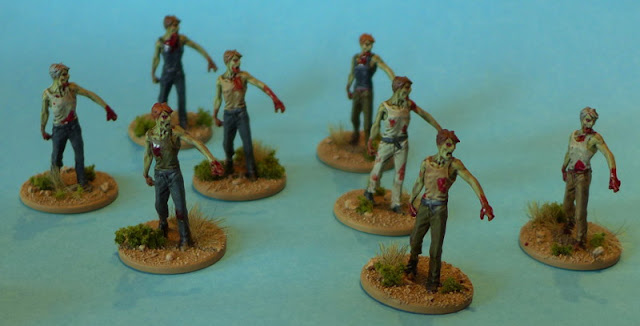 Everything's better with zombies some say. Well at least our games' closet is!

As early as summer 2016 the Kickstarter campaign about Zombicide - Black Plague caught my attention. A friend from our club was about to back it and I got slightly tempted to follow his example. Especially because I read from some of my blogging fellows who seemed to develop a certain addiction to killing zombies. Anyway I wasn't able to convince peaceful Mrs Monty that zombie hunting is a good activity for our regular board gaming sessions so I refrained from backing Black Plague and banned the whole thing to the back of my mind...

But it came to pass in these days that I had this splendid hobby weekend near Stuttgart. As I mentioned earlier Saturday evening was tainted with the medieval incarnation of the zombie apocalypse. Namely we played the earlier mentioned Black Plague there and all my desires for this series of board games came up again. All geared up with personal experience rather than internet rumors I returned home and explained the game to attentive Mrs Monty and painted a most glowing picture of it. Anyway I was successful and thus Zombicide - Season 1 found its way into our small but exquisite collection of board games. After the first game changeable Mrs Monty fell under the its spell and turned to be the mainspring for organising the following sessions and the future growth of our Zombicide collection. Believe me I love it when a plan comes together...

Finally I decided that a miniature game in my possession must not stay unpainted. Thus after Imperial Assault I took the challenge to paint playing pieces again. First for the zombies to get a feeling for the style and the quality of the figures: 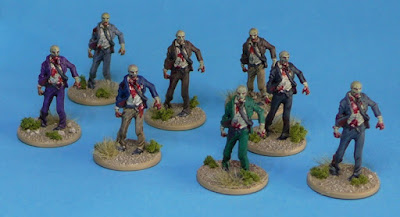