Currently I'm reading Adam Zamoyski's book about Napoleon's Campaign in Russia in 1812. The book was published in German last year with the title "1812 - Napoleons Feldzug in Russland" but it is the translation of "1812: Napoleon's Fatal March on Moscow" which was released in April 2005. However I discovered it a couple of weeks ago when I picked up Mrs Monty at our local library. Although their history shelf is rather sparsely populated with interesting books they bought this work because it stormed the German Spiegel best seller list for non-fiction books.
Since then I worked through the first 200 pages and wanted to let you know my thoughts and my honest recommendation:

The author starts with an overview over the political situation before 1812. He points out Napoleon's worries as self-made emperor and his efforts prepare a solid state and power structure for his son. All the constraints that forced him to carry the struggle with Great Britain on are pointed out clearly and Zamoyski underlines Napoleon's and France's inner and outer conflicts during those year after the revolution. On the other hand he characterizes Zar Alexander I. as unstable and rather heavily dependent on his staff and household due to the circumstances of his accession to the throne. However Zamoyski points out the way to war during 1809 and 1812 very lively quoting a lot of letters or note from contemporary diplomats.

But real tension grows when Napoleon starts to invade Russia. After Zamoyski's description of the preparation the mindful reader forbodes the adversity which were winding up. But once again the numerous statements of contemporary witnesses pinpoint all the sufferings and the needs of the multi-national Grande Armée. Even during their march towards Moskow and Saint Petersburg they experienced all problems which lack of supply and dirty weather can achieve. The author describes the fate of Napoleon's soldiers clearly and here and then draws the line to the Emperor's decisions which turned out to be partially fatal mistakes.

Although I haven't reached the climax of the book, the retreat of the beaten army, so far, I can deeply recommend it. To me Zamoyski seems to describe the events rather fair-minded and neither Napoleon nor Alexander seem to be judged wrongfully. Nevertheless he points his finger to some characteristic weeknesses and tactically wrong decisions of theirs.

If you are interested in Napoleon's Russia campaign those 700 pages are worth a look. Not for nothing did 1812 lead several best-seller lists during the last years.

A while ago I decided to bid farewell to my old plain green gaming boards. Probably I'll keep them as emergency reserve but actually I want to build a nice set of modular tiles. Over the last months I tried different techniques, colours and material and finally I'm satisfied with the first tile I finished:
Hopefully some of you are interested in how I made the tile. On the other hand I need a mnemonic to remember the colours I used. Therefore I present you a tutorial for a durable, modular, light-weight gaming board:

Email ThisBlogThis!Share to TwitterShare to FacebookShare to Pinterest
Labels: Gaming Board, Terrain, Tutorial

Last weekend I enjoyed the freedom of a temporary bachelor and used it to spend some great time with three friends of mine. Bernhard, Holger, Heinz and me met at Bernhard's and arranged a photography session with an incredible crowd of 28mm miniatures most of them from Bernhard's collection. Even though it was a bit exhausting it was a great evening... night... day... whatever.
On Friday evening my three fellows played a Napolenic Blackpowder Game which was set around the battle of Plancenoit in June 1815. About two dozens of Prussians battalions stormed the churchyard of Plancenoit which was held by the fearsome Old Guard. Unfortunately I wasn't able to join this event but on Saturday when we met to take some shots I had a look on the board and it was just awesome.

During the last days I made some experiments with an old laptop and my digital SLR camera. It seems to work rather well to have it operated by remote control to check the pictures on the large laptop display. Some weeks ago we had a photo shooting session a while ago and some of the pictures were a bit disappointing because I got the background pin sharp while the miniatures in front were blurred. Definitely an aiming mistake with the autofocus but I didn't see it on the small display of the camera. Hopefully it works well when we have another painting session tomorrow afternoon. 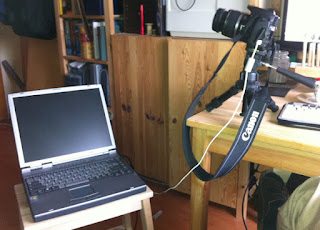 But besides that I made some painting progress on my Austrians. First I painted the backpacks and glued them on the miniatures. Afterwards I mended some mistakes and painted the remaining details which had to be painted before quickshading them. 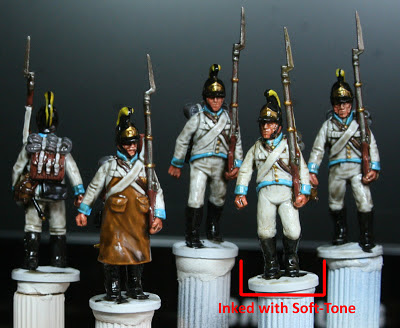 As a try I inked one of the miniatures with Armypainter "Soft Tone" and another one with my usual choice "Dark Tone". After some minutes of drying I decided that I prefer the stronger shades of the darker tone. Therefore I used it on all other miniatures afterwards. So 18 Austrians are painted and quickshaded and next week I'll paint the details (faces, moustaches etc.) and the highlights. Simultaneously I'll start with the base colours of the second batch.

Email ThisBlogThis!Share to TwitterShare to FacebookShare to Pinterest
Labels: 28mm, Austrian, Napoleonics, News from the Workbench


This weekend was a very special one since one of my oldest friends gave us the honour of an extensive visit. We met for an afternoon of painting and an evening with cheese, some port and an amusing board game.

Let me start with the painting session. Although we wanted to get some more paint on our Napoleonic Austrians we were hindered by some historical research to do. While I decided to build my Austrians after a brigade in the advance guard during the battle of Wagram (Brigade Mayer) Auld Nick is tending to represent the 3. Infanterieregiment "Erzherzog Carl" and the brigade it was located in. So we checked up different sources like the suitable Osprey books and the Nafziger Collection. But afterwards we spent some time with the miniatures and at least some work was done. On my Infanterieregiment No. 4 I managed to paint some metallic details on the muskets and the helmet. Nothing too special but at least some progress with half of the unit:
After daylight had vanished and our daughter had gone to bed we changed to another pleasure: Cheese and port. While playing an entertaining game of "Kingdom Builder" Auld Nick and me opened the first bottle and tired two other later in the evening. And no... We didn't empty none of them!