Last Friday the THS met in the headquarter once again and I had the pleasure to participate in another game of Bolt Action. We played on an urban board with a lot of really nice scenary which Achim provided. Although the buildings were actually designed for 20mm miniatures, they worked well with the 28mm figures you might remember from the first Bolt Action game report here (Link). It created a dense feeling of street fighting and allowed an exiting, entertaining but unusually short game. 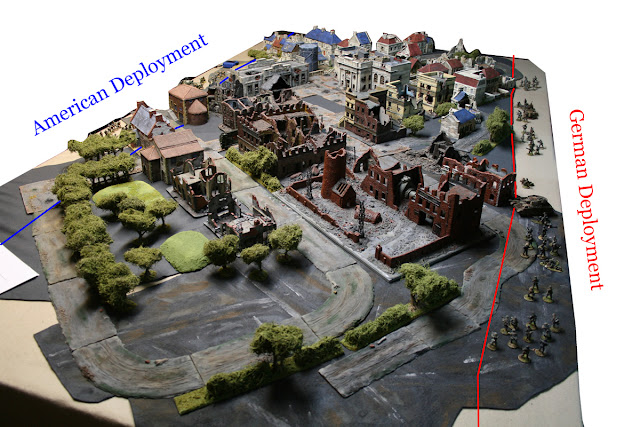 Within this small city a German airplane crashed down. It carried a high-ranking staff officer who escorted secret plans for the Army Group B to counter the Allied advance. Although he survived the crash, he severely wounded and unable to find his way back to the German lines.
To rescue him and the plans the Germans launched a search and rescue mission. At the same time the Americans sent a small vanguard to catch him and take him prisoner to lay their hands on the top secret plans. 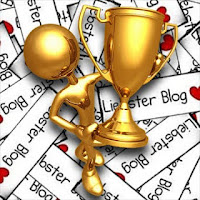 The "Liebster Blog Award" is circling through the bloggosphere since a few week and last week my humble blog was decorated with it by Sander from "Modus Reg Magni Momenti"-Blog.

Thanks for the kind support, mate !

The rules for this nice affair are the following:
Copy and paste the award on your blog linking it to the blogger who has given it to you.


After half a year of reading and writing blogs I'm familiar with a lot of great and interesting blogs and some really nice mats which tend to read my blog regularly. Several of those blogs have more than 200 followers and so they're out or were already decorated with "Liebster Blog".

But however I made my choice and want to pass the award to the following five blogs:

Last saturday I played another game of Bolt Action. Some fellows of my old 20mm wargaming group visited me and we wanted to try how the rules work with smaller miniatures. Furthermore we have been developing our own ruleset sine 1995 and are still looking for new ideas.
Unfortunaley our main German collector and scenary builder was unable to join us. So we were limited to my very small pool of terrain and Axis troops. Therefore the board was realy simple and nothing compared with the great scenery we played the week before.

However we made the best of it and fielded the following troops:

The missiom resembled the one from the week before:
The secure their advance the Americans sent a vanguard which was ordered to establish an outpost within a large building overviewing the main road of the village (marked with a yellow 1 on the map). The German and Italian had to defed their position and stop theAmerican advance. 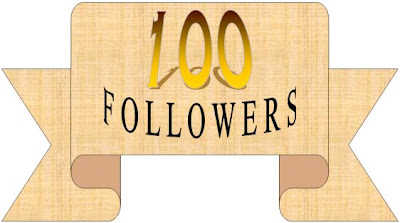 Nearly disregardedly last week some well-resprected readers of Monty's Caravan decided to follow my blog.Thereby the edge of 100 readers was reached after ten months of blogging.


Thanks you very much for your support as well as the kind and informativ comments I've been receiving ever since!

Monty's Caravan started as kind of self-motivation and digital memory for me, but I'm really happy that so many fellows out there are interested in my workbench. During the last months I became acquainted with so many great blogs, awesome miniatures and skilful wargamers that I don't want to miss. Although I tend to comment other blogs only rarely, I'm always trying to stay in the loop.

In the future I'll try to keep things going and post once or twice per week. For the following weeks there are some things which have been waiting to be posted already:
- A game report of another game of Bolt Action we had last Saturday
(unfortunately on a board which was a lot simpler than the last one)

- A review of my visit at the German Navy Museum

- Some news from the workbench

I hope to get the first thing (the Bolt Action Game Report) done until Wednesday. Unfortunately picture editinig is so time consuming. It eats up all my precious modelling time...

It was Friday evening in a cosy suburb of Düsseldorf were five of us met to play a game of Bolt Action. For me it was the first one and I was a nervous because of the new set of rules, but they proved to be really well designed and smooth-running. At the end of the game the common actions worked well without looking each dice roll up in the rulebook.

But now for the game itself:
Our umpire prepared a nice board with some Italian terrain and a fictional mission which was set somewhere around Anzio. Some Germans were holding a small village while the Americans sent a small force to occupy it for some strategical to maintain supply route from the beach. 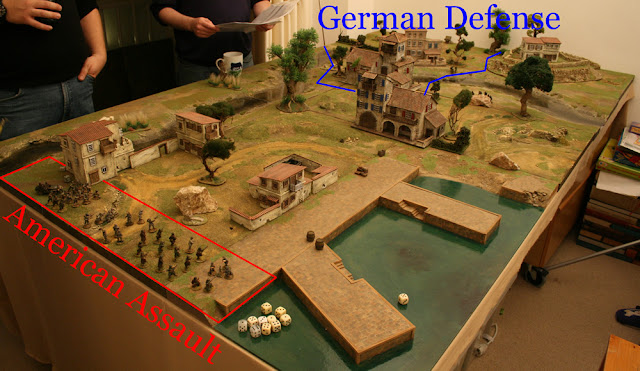 The Americans were heavily piqued after there successful Operation Shingle (landing near Anzio) and were keen on driving there advance forward. Therefore they sent a small task force to a small village behind Anzio to secure the bridgehead and arrange a supply route for the following forces.

Am I a proper wargamer ?

Some others answered those questions already and I don't want to keep you in the dark about the question whether I'm a proper wargamer:

* Pricked your finger or thumb on a pike block - several times.
Unfortunately yes.

But less than half of them was bad enough to never play them again...

After a review of our game in my last post, here are some pictures of other great tables:

As I told you last week I visited "Crisis 2012" yesterday. The convention was organised by the "Tin Soldiers of Antwerp" (Link) and took place at a hall near the port of Antwerp. I went to the event with my fellows from the "THS - Team for Historical Simulations" (Link) and we (mainly Robert) prepared a nice 15mm / 18mm fantasy game, but more at that later.

The trip started on Friday around half past eleven and firstly I picked up Robert and Michael. Afterwards we set sail for Antwerp. Fortunately traffic wasn't to dense and so we reached our destination at half past three. After a little search we found our dwelling where we meat Achim and Eymard two other mates of our team. Axel, Bernhard, Holger and Heinz, the remaining members of our party arrived later and we met them at the hall.

The quarters itself was the first highlight of the trip. We booked some cabins on the houseboat "Hannus". All was tidy and comfortable and we were absolutely satisfied. The only disadvantages were the narrowness and the loud wooden planks which were quit noisy when anyone went through the ship.

Unfortunately I've got only blurry and dark pictures from the ship which I took with my cell phone. But this one gives some an impression:

After we dropped our luggage on the ship, we went to the convention hall and started to prepare the gaming table for the next day:

When we had finished our preparations for Saturday, we had dinner in a small pub near our ship and enjoyed some pints of Belgian beer. A pleasure which was only excelled by the nice chat we had.

Eight Highlanders finished and a journey to undertake

Finally the next eight Highlanders for my Waterloo Black Watch are finished:
Each and every of those men has its specific blemishes but to me they seem suitable as rank and file troops. Next week I'll start with the last eight soldiers including an officer, sergeant, drummer, an ensign and the piper. With a little luck I'll be able to finish them before Advent season.

In addition to this good news the coming weekend casts it's own shadow ahead. This year I'll visit the Crisis-Comnvention at Antwerp (Link). I'll have the great pleasure to visit the show with my fellow gamers from the "Team for historical Simulations"(Website here) from Erkrath (small town near Düsseldorf within the German Rhine Area) and support them at their presentation game. It will be "Prelude to the Battle of the Five Armies" (a little foretaste here) a kind of rencounter before the actual battle. The scenario and terrain was developed by our mate Robert for 15mm / 18mm miniatures and we'll use the "Triumph and Tragedy" ruleset (website here) with some adjustments and additions (therefore called "Triumph, Tragedy and Trolls").
But alongside I expect an awesome trip with the boys and a nice day at Crisis. I#m looking forward to meeting some guys in person which I've been knowing from the world wide web for some time.
However I'll post a report next week.