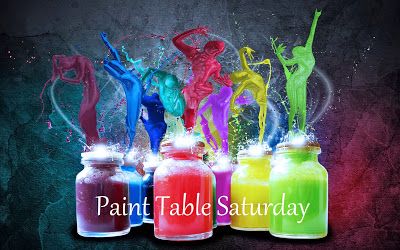 Actually we're preparing to have some friends with us later but while Mrs Monty and the girls are out to do some last food shopping I found the time to post a short notice from the workbench. During the last week time was tight as usual but I proceeded to paint the AWI officers and the driver I started lasst week: 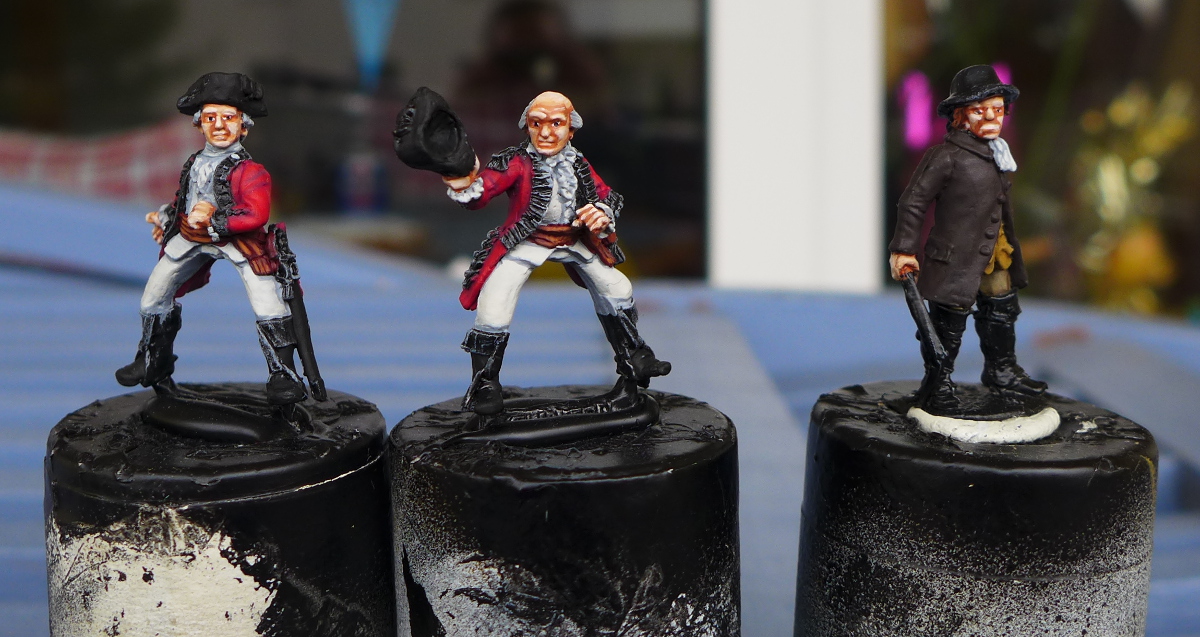 As you see they are not finished yet but on a good way. Next they'll get dark blue lapels, golden lacing and some more highlights on the shirts, trousers and maybe on the jackets. Not to forget the boots but the most time consuming part - namely the faces - is done. Again I used the six colour Wargames Foundry paint set and I'm really glad with the colour gradations.
The grim fellow on the right will need some more work. Although I did the best I can with the face he needs highlights for all parts of his garment. Fascinating that all three miniatures were sculpted by the Perrys. Especially the face of the middle figure which shall represent General Clinton is superb while the driver is very slight in details...
Simultaneously I washed the horses with Armypainter Wash "Strong Tone" but I didn't take pictures of this sparsely interesting step.

Anyway I hope to find some time to finish the boys next week and maybe even the horses.

Finally it's time for spring cleaning and thus I sorted out some old miniatures from my Warhammer Fantasy and Warhammer 40K days to cede them. Of course I would appreciate to give them to a good new home so let me offer them here at first:
After all it's a set of two units of crossbowmen and two repeater bolt throwers. I bought them a couple of years ago so probably the plastic models are from one of the last editions. They are painted with Citadel colours by humble me.

Here are some detail pictures:
To buy those chaps in their new incarnation would mean to spent £77. Unpainted of course. Since they are rather well painted and ready to use I'm asking for about £125 (+ p&p) or near offer.

So if you like the models and want to place a reasonable offer then please email to :
montys[dot]caravan[at]googlemail[dot]com

International shipping is no problem. It should be between 9 € and 16 € worldwide, uninsured. As insured parcel more expensive of course.
Eingestellt von Stefan (aka. Monty) 3 comments:

Reviewing the challenge - Spreadsheets and miniatures

It's two weeks now since Curt's 5th Analogue Hobbies Painting Challenge ended and thus it's time for a short review. Once again it was a splendid quarter of a year which was packed with pure hobby goodness. It was great fun to be part of the 72 participants who submitted a bunch of awesome pieces of art. Finally we collected submission equivalent to 64.905 challenge points or 12.981 painted 28mm foot figures which are worth 5 points each. Miles calculated those data and I think that's an overwhelming result. Read his complete evaluation here.

Anyway for me it was a great time once again and although I had been below my desired points for a couple of weeks I reached my 750 point target finally. Honestly the last weeks were rather lucky with my Richard III. finishing on first place in the antihero bonus round. In the end that saved my bacon but see yourselves: 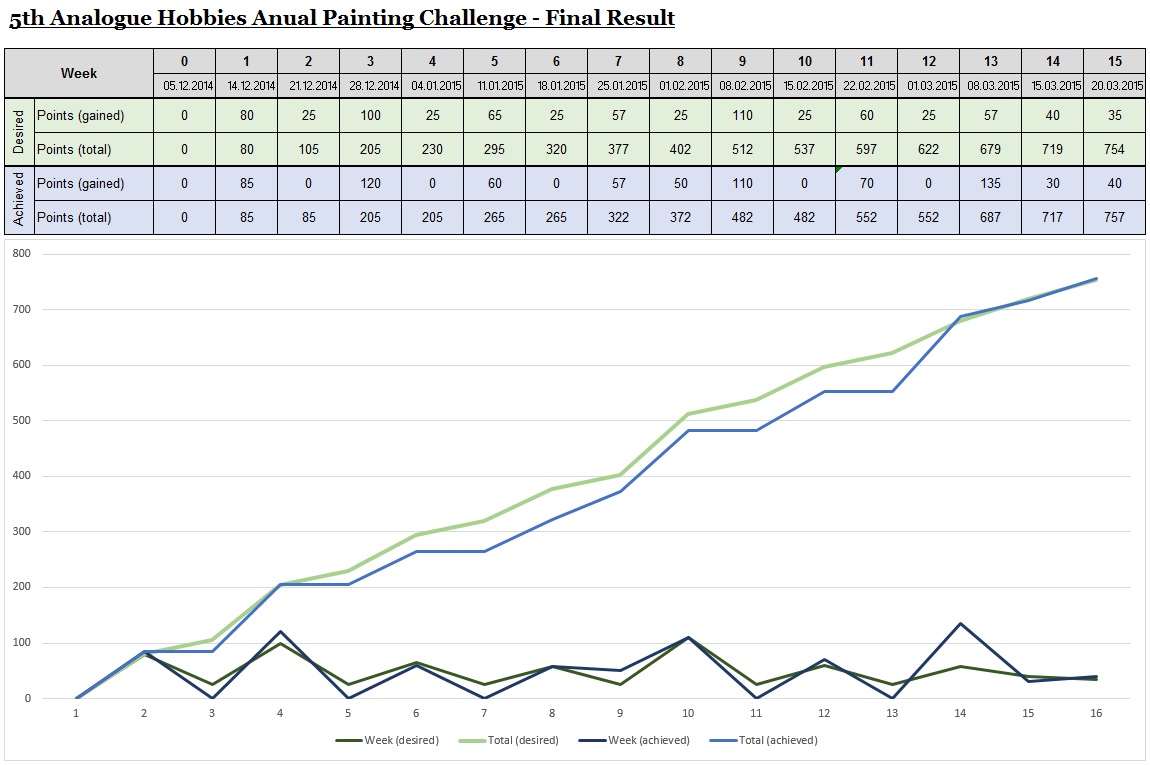 After all I had ten entries in the challenge. Seven of those for the bonus rounds and three regular submission. Here they are (below the pictures there are links to the actual blog posts with more pictures and details):

War of the Roses Infantry

"Curtgeld": Pirate Captain
After all that's 46 figures which I painted during those three months. Since I know how lousely slow I paint that more or less satisfying for me. Especially Richard III., Thor and the pirate captain were very time-consuming and I've been working on some scenary simultaneously. Finally those entries were enough to collect 757 points and to fulfil my side challenge with honourable Michael Awdry. We challenged one another to not miss a single bonus round submission. The winner was able to receive a figure from the slacker but after all we both achieved the task so neither of us has to fulfil his artistic duty.

Many congrats, Michael.
Your submissions pleased the eye.

Most of you should know his blog where he presents his outcome. If not then take a cup of tea - or better a pot -, make yourself comfortable and head to Awdry Towers. If you have any other appointment today then set the alarm clock. Otherwise you'll get lost in his gallery. I highly recommend his pieces for the British Sudan and Zulu campaign.

Last but not least let me introduce Curt's people's choice voting. Here each and every visitor of the challenge has the chance to pick his or her top three entry from all the gorgeous figures that were submitted. Stroll around for a while and find your favourites within the bonus rounds or the regular entries.

My last post here on Monty's Caravan was way back. Actually I can't even explain why I didn't manage to keep it rolling but somehow my hobby spirit ceased after the Painting Challenge ended.

On the one hand these three months of hobby goodness were incredibly intense, challenging and outstanding that its end left a void of motivation on my workbench. On the other hand real life was nasty during the last weeks. Our little one has been suffering from a severe bronchitis, my spinal became inflamed and in addition we're preparing Easter lunch this year for our family. Anyway I don't want to start whining now but due to this painting and gaming stepped back occasionally.

But the last rather quiet week restored my spirit and let me return to the workbench. On 1st May there a Bank Holiday in Germany and a couple of club fellows and me are planning to hold a AWI game then. For this I started to prepare two mounted British officers and a horse drawn artillery limber. This is their humble WIP status: 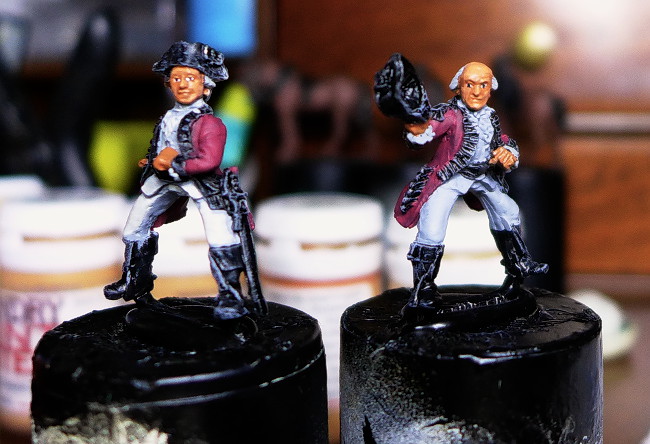 You see it's not that much yet but I hope to get ahead during the next days. Besides that there are a couple of posts for the blog I'm preparing, e. g. a Saga game report and of course review of this year's painting challenge.


But for now let me which you and your families a happy and blessed Easter !
Eingestellt von Stefan (aka. Monty) 11 comments: