Last weekend an event of extraordinary extent took place in Krefeld a small town in the Rhine area of Germany. The wargaming group I've been playing with regularly for a few months is playing some games for a partly fictional Napoleonic campaign from time to time. Besides smaller scenarios they hold a big weekend event anually and this time the fictional second siege of Kolberg was fought out.

First for the (partly fictional) background:
In late 1812 Napoleon's Grand Armée retreated from Russia after their defeat during the French invasion. At that time Lieutenant General Ludwig York von Wartenburg lead a Prussian corps which represented the rearguard of the French army. During the march and after some minor skirmishes he lost connection to the other French forces and became isolated. Under the pressure of his subordinate officers and initiated by General Carl von Clausewitz who was in service of the Russian Empire York signed the Convention of Tauroggen on 30th December 1812 and made a separate ceasefire with Russia.

Thereafter the story of the campagne took an alternative way:
The ceasefire caused kind of atmosphere of departure in Prussia. The French tried to scotch this by attacking York's headquarter and taking him and Clausewitz imprisoned. After a propaganda trial both were executed as traitors. Nevertheless the flame of freedom was ignited in Prussia. While well-known statesmen protested against the alliance with France, August von Gneisenau took a secret mission to Russia, Sweden and England. He convinced the allies that it was the right moment to lead the crucial blow against Napoleon. After von Gneisenau delivered an impressive speech in front of the Houses of Parliament, the English decided to set up an expiditionary force to support Prussia. These troops landed in Kolberg in Western Pomerania and conquered the town (which the French besieged five years ago) and the surrounding harbour and fort. (This scenario was fought last year.)
Now the French realized the rising pressure and gathered their troops to destroy the English bridgehead. They sent the 10th Division under the command of General Dominique-Joseph René Vandamme and assigned support of large reserves of the III. French Corps and a Polish Division that should defend Vandamme's flank against the allied reinforcements (Russian, Austrian and Prussian troops). Meanwhile the British forcers lead by General Rowland Hill fortified Kolberg and prepared themselves to hold the town until reliefed by their allies...

So the game started on Saturday from the following initial position:
- An English Division under command of General Rowland Hill holding Kolberg
- The 10th Division of General Vandamme attacking Kolberg
- A French Brigade (mainly Swiss troops in Napoleon's service) holding the village Henkenhagen
- A Polish Division holding the villages Bullenwinkel, Degow and Fritzow
- Allied relief approaching from the East:
- Prussian troops in the North along the coast
- Russian and Austrian troops advancing towards Bullenwinkel and Degow

Because I wasn't present on Saturday I don't know the exact deployment. But it must have been something like this.

The grey area is kind of abstract. It wasn't built up as table but it held the French camp and their reserves. The French and Polish players were able to ask for reserves by sending ADCs and then based on a set of special rules they got the reinforcements by way of the roads from the grey area onto the battlefield.

The table we played on was enormous. One of the umpires told me that it measured about 70 square feet. The two longer sides had about 6 metres while the shorter ones had about 3 metres. When I arrived on Sunday morning the table was packed with excellent terrain pieces, nice buildings and absolutely beautiful miniatures.

Take a look at this long shot and judge the impression yourselves:


Michael, one of the English leaders, was present on Saturday only. Therefore I got his place on the battlefield and  took command of the brigade under Major General Sir Denis Pack. It consisted of four line infantry bataillons which were based at the fortress of Kolberg and behind the entrechment. Additionally Axel, the English supreme commander, put two batteries of 12 pdr. guns and a battery of RHA Rocket Troops under my command.

So take a look at the town of Kolberg and the fort guarding the East. In the background you see the southern entrechments and the Wolfsberg where the French heavy artillery took stand:

However the English troops were holding the fortifications steadily. Here you see the fortress manned by the brave soldier's of Pack's Brigade. You might recognize the men on the front part as the 44th Rgt. of Foot which I painted during the last weeks:
On the other side the French set up strong artillery forces around Kolberg. On top of the Wolfsberg hill they placed serveral batteries of heavy guns and a howitzer. Therewith they were able to hit the entrechments heavily and caused several breaches. But they weren't able to storm those breaches on Saturday since the English held up bravely.
On the Eastern side of Kolberg the French deployed their Guard Artillery. They set up two heavy guns, a medium gum and a howitzer to set heavy shelling onto the fort. When I took command the walls were still intact but already heavily hit... It was only a question of time when the French would be able to shoot them to pieces...

Well... That's enough for now. It's the situation of Sunday morning. During the next days I'll try to write a report of the happenings during the second day of the siege. I'll not be able to review the whole game because it was just too much. But nevertheless some more nice pictures and some continuative information...

Read more about this epic event in Part 2: Here.

The last week was very busy. Therefore I regret that I wasn't able to post a new article earlier.
This weekend the wargaming club I'm recently playing with will host a large Napoleonic event. It's set before a fictional 1813 background where Britainn had decided to support the Prussians and the Russian after the convention of Tauroggen (look here) and sent a expiditionary force to Prussia. In an earlier game the British forces landed at Kolberg in Middle Pomerania and formed a bridgehead there by taking the fortress guarding the town and the bay.
On the Saturday and Sunday the French will try to shatter the small English forces and reconquer Kolberg. The British will try to hold the hround until Prussian, Russian and Austrian troops relieve them.

The table will measure enormous 14m of length and there will be twelve players and umpires around. Unfortunately I'm able to participate on Sunday only but I'll try to post some kind of review next week.

However... I had to paint some Royal Foot Artillery crewmen for the fortification's batteries and spent every single minute to finish those thirteen men:


Please excuse the unusually bad quality of the pictures. I took them with my mobile phone this morning after I varnished the figures.

Next week I'll try to finish the guns and bases and then I'll post some better pics.
Eingestellt von Stefan (aka. Monty) 7 comments:

Well... When I started with the Napoleonics I thought it might be a good idea to base them on coins. Those are clean, smooth and circular and ideal for single based skirmish miniatures but in addition they are magnetic. This ability should enable me to put them together on prepared bases with a kind of magnetic foils underneeth. 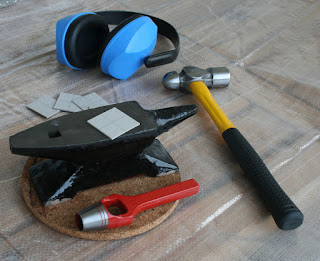 First I wanted to make the parts on my own. So I bought a sheet of 2mm cardboard as well as a cheap 17mm hollow punch. I cut the card board in 40mm x 40mm pieces and  and placed them on a small anvil for a strong and smooth underground. To preserve the tool I put another strap of cardboard below the one which is to be pierced.

With the first one or two bases things went well and I got nicely cut holes. But afterwards the hollow punch went dull although I watched not to hit the anvil...

The further results were a disaster. The cardboard was cut irregularly and the arches between the holes were torn. Maybe I could have managed to get six more or less working bases out of this stuff but I was really angry about the bad quality of the hollow punch.

However I searched the internet and found the website of a small English provider:


Diane and Martin offer a large variety of different tokens, bases, trays and lasercut buldings. Both are absolutely kind and it was a great pleasure to deal with them. I pointed out what I was in need and Martin made me the top bases exactly as I needed them for a good price and incredibly fast. If I had known this befor I wouldn't even have thought of cutting those pieces by myself... 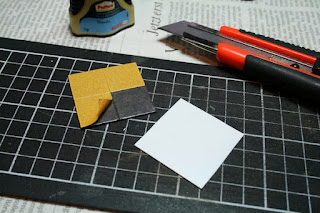 However with this exellent material things went easy.
First I prepared the magnetic part of the base. Thereto I cut a 40mm x 40mm square of thin plastic card and fit the self-adhesive magnetic foil on it. 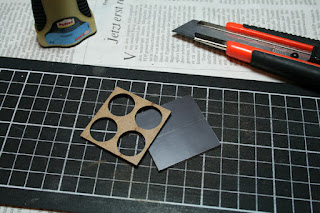 Now I glued the lasercut 2mm MDF top bases on top of the magnetic foil. It was cut in a way that leaves open for circles of 17mm diameter. Just large enough to take the 1ct coins the figures are based on. 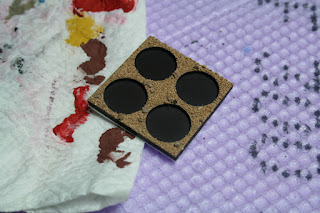 Afterwards I covered the base with PVA glue and added a layer of usual sand. After drying I overlaid it with thinned PVA glue to prevent the sand from crumbling away. 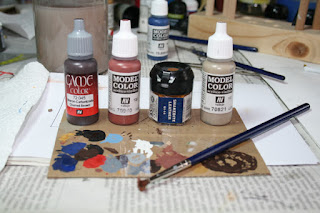 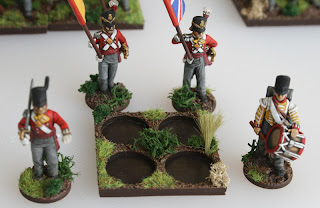 Lastly I decorated the bases with some scenic stuff I keep for that purpose:
- static grass
- field grass
- clump foliage
- lichen 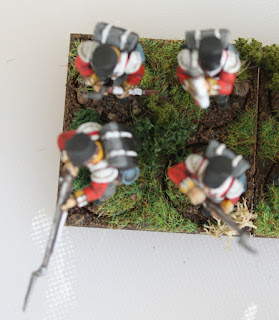 Since I wanted to have the unit look coherent as a whole I put on the scenic material in a way that concealed the gaps between the coins and the trays a bit. 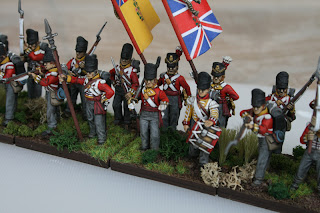 Additionally I tried to adopt that idea for the bases themselves. I applied some identical scenic stuff at the touching borders of the different bases.

Last week was quite in Monty's Caravan. For the last evenings I've been busy with three gun crews of Royal Foot Artillery which habe to be finished until next week because they're needed for a large Napoleonic game in a fortnight.
Additionally I have to deepen the Black Powder rules, learn the composition of the army for the game and arrange things with my allied commanders.

Nevertheless I want to keep you informed and present the major progress of this weekend. I finished the bases of my 44th Rgt. of Foot finally:
Within the next few days I'll try to post a short tutorial how I made the bases. Nothing too exiting bit to me the result has been worth the efforts.
Eingestellt von Stefan (aka. Monty) 10 comments: