Finally I was able to get something finished! After some kind of lean time I managed to spend some time with my highlanders this weekend. Two weeks after I posted a picture of the first brave Scotsman a third of the unit is finished:

Although each and every of the miniatures has its small faults, I think they turned out well. Therefore I'll proceed with the same technique for the other members of the unit.

The next eight are already on the workbench and I painted the basic tartan today. I hope to be able to advance steadily this week.

But tomorrow will be under the sign of D. I. Y. My wife and I bought two new glass cabinets for the wargaming stuff. Tomorrow we'll put them together and rearrange our flat a bit. I'll present some pictures when it's done...
Eingestellt von Stefan (aka. Monty) 11 comments:

Last week was rather dull. Since some pain in the back and neck was punishing me, I wasn't able to do much painting sadly. However I managed to get some minor things finished. Nothing too special but better small steps than nothing...

1.) Prepared the next seven highlanders

2.) Made an compartment for storing scenary

3.) Scanned my terrain pieces and prepared a Powerpoint terrain kit

You see... Nothing worth a single post. However the next week seems to be promising. My wife and me found a nice pair of glass cabinets which shall become the new home of my miniature stuff. I hope to be ale to present them bought, built and arranged next week.
Eingestellt von Stefan (aka. Monty) 4 comments:

Well... The last week was rather boring. Things with the highlander are proceeding well but very slow. Just now the boys are in a WIP-condition, with which I don't want to hurt your eyes.

However yesterday I ambivalent pleasure to finish another year of age. To make that a bit easier I spent the afternoon with my beloved family and my parents having a delicious dinner in a nice restaurant nearby. Stewed cheeks from ox in port sauce... And a nice glas of Cabernet-Sauvingnon... Hmmmmm...

But my wife managed to crown the day. She gave me some rereinforcements for my British:
- A set of 95th Rifles command
- A box of Victrix Waterloo Center Company
- A box of Perry British Hussar

Especially the last present was a great guess of hers since I had an eye on these brilliant miniatures for weeks... 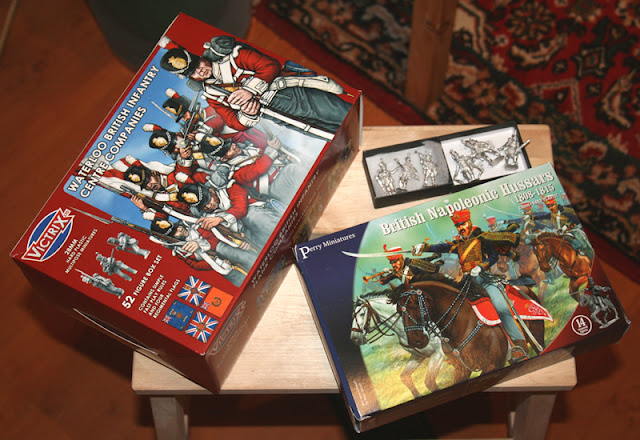 So you see: A lot to do within the next year...
Eingestellt von Stefan (aka. Monty) 7 comments:

After the long posts of last week, there's only a short update today.

Lastly I prepared my next unit: The 42nd Rgt. of Foot "Black Watch".
Because of the good price I bought some Victrix plastic miniatures. To me they look really great. The details are nice and crisp and I like them better than the Royal Foot Artillery by Victrix I recently painted.

Although there are some promising decals by Warflags on the market but I decided to try my luck with painting them myself. On the World Wide Web I found a nice tutorial by John O'Brien (Link). He explains a kind of simplified tartan for toy soldiers and I used the following colours:
For the rest of the uniform I used the same colours as for the 44th. On the picture below you see one shot of a highlander with the painted kilt only and on the left a nearly finished model with Armypainter Quickshade applied already. Although there are some finishing touches (buttons, highlights) to do I'm really pleased with the result. The kilt turned out better than I expected and you can guess which tartan it shall represent. Nevertheless I'm afraid of the grenadiers and the drummer with an additional thin red check above the usual government tartan... 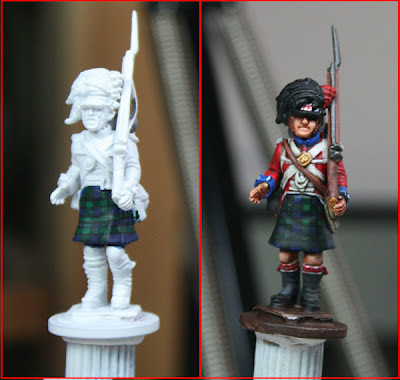 I hope to ale to proceed with the next highlanders quickly and maybe I'll be ale to post some new pics next weekend.
Eingestellt von Stefan (aka. Monty) 6 comments:

Now for some expressions of the second day of this epic battle. As you may have read here (Link), things were serious for the English. Although the fort was in good order and all previous assaults on the entrechments had been thrown back, the French pressure was rising constantly.

Especially the French Guard artillery which took position north of the fort fired without cease and finally shattered the northern wall of the rearmost bulwark. Nevertheless the English stood steady and prepared for the French assault:

Because the pressure on the French and Polish troops holding the surrounding villages concentrated, the French Supreme Command decided to try the deciding blow. They threw their last reserves into battle and sent his heavy cavalry to support the Polish at Degow and Fritzow (link to the map). Simultaneously they sent the Young Guard to assault the English sconces in front of Kolberg while his remaining regular troops attacked Fort Schill:

Hoping for relief the English prepared for their final battle. The walls of the fort lay still under heavy fire and the English morale wavered. But the generous courage of Major General Pack inspired his brigade. Again and again he rallied the troops and singing "God save the King" they bore up against the attackers.

Meanwhile the French entered Kolberg from the South. Although General Major Halkett and his brigade fought bravely they weren't able to hold the walls. After defeating two French brigades and capturing one of their commanders they had to retreat. But the English didn't ginve up. They occupied the houses of Kolberg and prepared for a bloody struggle for every single street and lane...
But thankfully our allies weren't deedless. On the other flanks they browbeat the French and the Polish. While the French heavy cavalry broke down between the Russian and Austrian infantry squares, the occupying forces of Henkenhagen groaned under the pressure of Field Marshal Blücher and his Prussian troops. In the heat of the battle a confused batallion left Henkenhagen for a countercharge and heralded the ruin of the French Northern wing.

So in the early afternoon it became clear that the French couldn't be able to conquer Kolberg befor the allies would stab them in the back. Therefor General Vandamme decided to gather his survivers and betook himself to flight... What a fight !

Although I was only present on Sunday and my dues were rather small (just holding the fortress...), the game was an absolutely great experience. My teammates as well as our opponents were nice, fair players and even during the heat of the battle the atmosphere was calm and friendly. The umpires did a good job when leading the game and an incredible job when preparing it before. I hope to be able to play with the fellows from the THS (Team for historical Simulations) furthermore and I'll be happy to post some pictures of forthcoming events from time to time.

When you enjoyed this short synopsis then have an eye on the Lead Adventure Forum (link). An official review of the whole event is in the making which will be posted there. But please be patient since a report for such an enormous event needs time. In any case I'll let you know when it's online.
Eingestellt von Stefan (aka. Monty) 10 comments: